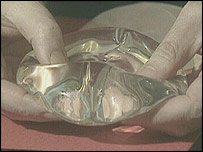 Breast implants may make it harder for doctors to interpret mammograms, research finds.
However, scientists found no evidence that the problems led to cancer reaching a more advanced stage before it was picked up. Neither did breast augmentation appear to increase the risk of developing breast cancer.

The research, by Seattle’s Group Health Cooperative is published in the Journal of the American Medical Association.
The researchers found that, among women who had not had breast implants, mammograms accurately raised concerns in 66.8% of women who went on to be diagnosed with breast cancer in the next 12 months.

The figure among women who had undergone breast augmentation was only 45%.

Blocked view
The problem with breast implants is that they show up as a solid white mass on the mammography film, blocking the view of the breast tissue. 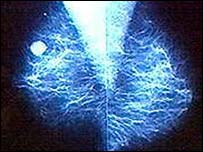 Even when mammography technologists use a special technique called implant displacement views, which attempts to move the implant out of the way, there is still breast tissue that cannot be seen on the mammogram.

The reason why this should be so is not clear. However, the researchers suggest it may be easier for women with implants to detect cancers missed by mammography because they often have less of their own breast tissue.

Alternatively, tumours may be more noticeable because the implant provides a firm platform to press against.
In addition, women with breast implants are told to check their breasts often for any problems with the implant, so they may be more likely to find lumps on their own.

Finally, women with implants may be more body conscious and seek medical advice more quickly if they have a symptom.
The researchers say that women who have undergone breast augmentation should be screened at the same regular intervals as others, but they should be more ready to question the result if they feel they have suspicious symptoms.

wpengine
This is the "wpengine" admin user that our staff uses to gain access to your admin area to provide support and troubleshooting. It can only be accessed by a button in our secure log that auto generates a password and dumps that password after the staff member has logged in. We have taken extreme measures to ensure that our own user is not going to be misused to harm any of our clients sites.